Office of the Superintendent

Mr. Joseph Matise, was selected as the Superintendent of Ridgeland School District 122 in July 2018. Mr. Matise is a graduate of Carl Sandburg High School in Orland Park.  He received his bachelors from Northern Illinois University and masters from Governors State University.  Currently, he is pursuing his doctorate of education through Concordia University.

Matise joins us from Burbank District 111 where he served as the Chief School Business Official for the past three years.  Prior to 111, he spent ten years in Chicago Heights District 170.  Throughout those ten years he served as a teacher and held various administrative roles.

Mr. Matise enjoys Ridgeland School District 122 and looks forward to continuing his work with our students, stakeholders and staff for continued success. 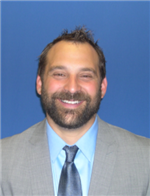